Seasonal anthology series in which police investigations unearth the personal and professional secrets of those involved, both within and outside the law. 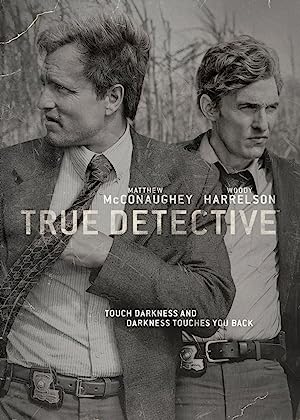 True Detective is an American anthology crime drama television series created and written by Nic Pizzolatto. The series, broadcast by the premium cable network HBO in the United States, premiered on January 12, 2014. Each season of the series is structured as a disparate, self-contained narrative, employing new cast ensembles and following various sets of characters and settings. The first season, starring Matthew McConaughey, Woody Harrelson, Michelle Monaghan, Michael Potts, and Tory Kittles, takes place in Louisiana and follows a pair of Louisiana State Police homicide detectives, and their pursuit of a serial killer over a 17-year period. The second season, starring Colin Farrell, Rachel McAdams, Taylor Kitsch, Kelly Reilly, and Vince Vaughn, is set in California, and focuses on three detectives from three cooperating police departments and a criminal-turned-businessman as they investigate a series of crimes they believe are linked to the murder of a corrupt politician. The first season received generally excellent reviews from critics and earned high ratings for HBO. It was nominated for and won numerous awards and other accolades, chiefly for its acting, cinematography, writing, and direction. Reception to the second season was more divided, though the show maintained high viewership for HBO. The third season was greenlit in August 2017, with Mahershala Ali cast in the lead role. Pizzolatto, Jeremy Saulnier and Daniel Sackheim serve as directors. Pizzolatto is the primary writer alongside David Milch and Graham Gordy. It is scheduled to premiere on January 13, 2019.