Ten years before Kirk, Spock, and the Enterprise, the USS Discovery discovers new worlds and lifeforms as one Starfleet officer learns to understand all things alien. 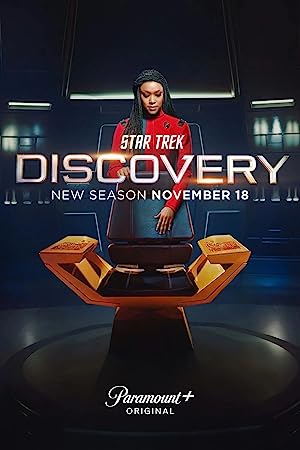 Star Trek: Discovery is an American television series created for CBS All Access by Bryan Fuller and Alex Kurtzman. It is the first series developed specifically for that service, and the first Star Trek series since Star Trek: Enterprise concluded in 2005. Set roughly a decade before the events of the original Star Trek series and separate from the timeline of the concurrently produced feature films, Discovery explores the Federation–Klingon war while following the crew of the USS Discovery. Sonequa Martin-Green stars as Michael Burnham, a science specialist on the USS Discovery. Doug Jones, Shazad Latif, Anthony Rapp, and Mary Wiseman also star. They are joined by Jason Isaacs for the first season, and Anson Mount and Wilson Cruz for the second. The new series was announced in November 2015, with Fuller joining as showrunner and wanting to make an anthology series. CBS asked him to make a single, serialized show first, with the prequel to the original series idea further developed. After further disagreements with CBS and struggles with other commitments, Fuller left the series in October 2016, replaced as showrunner by Gretchen J. Berg and Aaron Harberts for the first season, with producing support from Akiva Goldsman. Goldsman did not return after the first season, while Berg and Harberts were fired by CBS during production on the second; Kurtzman took over as sole showrunner. Star Trek: Discovery premiered on September 19, 2017, at ArcLight Hollywood, before debuting on CBS and CBS All Access on September 24. The rest of the 15-episode first season was streamed weekly on All Access. The series' release led to record subscriptions for All Access, and positive reviews from critics who highlighted Martin-Green's performance. A 14-episode second season was ordered in October 2017, and is set to premiere on January 17, 2019.