A recently released ex-convict named Shadow meets a mysterious man who calls himself "Wednesday" and who knows more than he first seems to about Shadow's life and past. 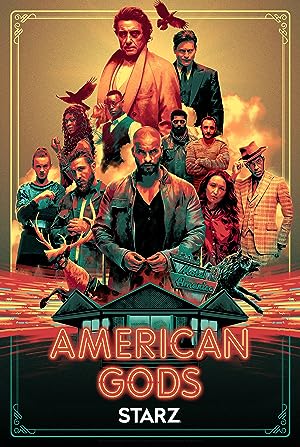 American Gods is an American fantasy drama television series based on Neil Gaiman's novel of the same name and developed by Bryan Fuller and Michael Green for the premium cable network Starz. Produced by Fremantle USA and distributed by Lionsgate Television, the first season premiered on April 30, 2017. Fuller and Green served as the showrunners for the first season and were replaced by Jesse Alexander for the second season. Gaiman serves as an executive producer along with Fuller, Green, Craig Cegielski, Stefanie Berk, David Slade, and Adam Kane. Charles Eglee is set to serve as showrunner for the third season. Ricky Whittle plays the series' lead Shadow Moon, who meets a strange man named Mr. Wednesday (Ian McShane) after being released from prison and soon becomes embroiled in a large-scale conflict between the Old Gods and the New Gods, who grow stronger each day. In May 2017, the series was renewed for a second season, which premiered on March 10, 2019. The following week, Starz renewed American Gods for a third season. The series received praise for its visual style and acting and received two nominations at the 69th Primetime Emmy Awards for Outstanding Main Title Design and Outstanding Special Visual Effects. It also received three nominations at the 8th Critics' Choice Television Awards, including Best Drama Series, Best Actor in a Drama Series for McShane, and Best Supporting Actress in a Drama Series for Gillian Anderson.