Fresh Off The Boat 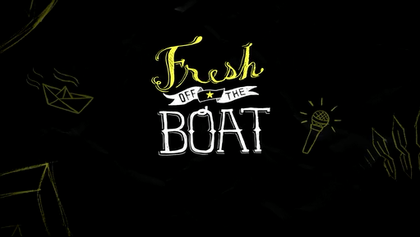 Fresh Off the Boat is an American sitcom series, starring Hudson Yang, Randall Park, and Constance Wu. Created by Nahnatchka Khan, it is loosely inspired by the life of chef and food personality Eddie Huang and his book Fresh Off the Boat. It is the first American television sitcom starring an Asian-American family to air on American network primetime since Margaret Cho's All American Girl, which aired for one season in 1994. Its style has been compared to the comedy series Everybody Hates Chris. The flashback technique with voice-over narration from the present day (first season only) is similar to The Wonder Years. The show debuted on ABC with two preview episodes on February 4, 2015. The second episode, which aired after Modern Family, was promoted as a bonus episode, and formally premiered in its primetime slot on February 10, 2015. The first of the two preview episodes garnered 7.94 million viewers, becoming the second-highest rated comedy premiere that season. On May 7, 2015, ABC renewed Fresh off the Boat for a second season of 13 episodes. ABC ordered 9 additional episodes on October 13 and two more on November 17, leading to a total of 24 episodes for the second season. On March 3, 2016, ABC announced that the series has been renewed for a third season, which premiered on October 11, 2016. On May 12, 2017, ABC renewed the series for a fourth season, which premiered on October 3, 2017. On May 11, 2018, ABC renewed the series for a fifth season, which premiered on October 5.