Four people and their otherworldly frienemy struggle in the afterlife to define what it means to be good. 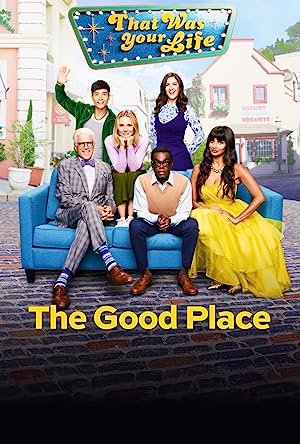 The Good Place is an American fantasy-comedy television series created by Michael Schur. The series premiered on September 19, 2016, on NBC. The series focuses on Eleanor Shellstrop (Kristen Bell), a woman who wakes up in the afterlife and is introduced by Michael (Ted Danson) to "The Good Place", a highly selective Heaven-like utopia he designed, as a reward for her righteous life. She realizes that she was sent there by mistake and must hide her morally imperfect behavior and try to become a better, more ethical person. William Jackson Harper, Jameela Jamil and Manny Jacinto co-star as other residents of "The Good Place", together with D'Arcy Carden as Janet, an artificial being helping the inhabitants. The Good Place received positive reviews upon its debut and has since gained critical acclaim. It has been praised for its acting, writing, originality, setting, and tone. In addition, its first-season twist ending and its exploration and creative use of ethics and philosophy have been positively received. The 13-episode third season premiered on September 27, 2018. In December 2018, NBC renewed the series for a fourth season.