After a supernatural event at his church, a preacher enlists the help of a vampire and his ex to find God. 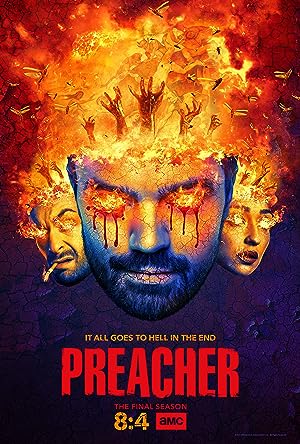 Preacher is an American television series developed by Sam Catlin, Evan Goldberg, and Seth Rogen for AMC starring Dominic Cooper. It is based on the comic book series Preacher created by Garth Ennis and Steve Dillon, and published by DC Comics' Vertigo imprint. The series was officially picked up on September 9, 2015, with a ten-episode order which premiered on May 22, 2016. In October 2017, it was announced the series was renewed for a third season, which premiered on June 24, 2018, and consisted of 10 episodes. In November 2018, the series was renewed for a fourth season, with production relocating to Australia.