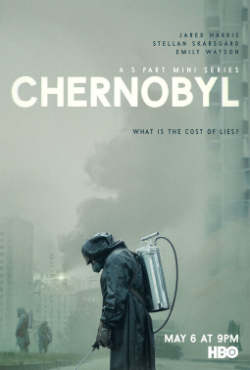 Chernobyl is a 2019 historical drama television miniseries produced by HBO in association with Sky UK. Created and written by Craig Mazin and directed by Johan Renck, the series revolves around the Chernobyl nuclear disaster of April 1986 and the unprecedented cleanup efforts that followed. It features an ensemble cast led by Jared Harris, Stellan Skarsgård and Emily Watson. The series premiered in five parts in the United States on May 6, 2019, and concurrently in the United Kingdom on May 7, to critical acclaim. At the 71st Primetime Emmy Awards, it received nineteen nominations, and won for Outstanding Limited Series, Outstanding Directing, and Outstanding Writing, while Harris, Skarsgård, and Watson received acting nominations.