As her 16th birthday nears, Sabrina must choose between the witch world of her family and the human world of her friends. Based on the Archie comic. 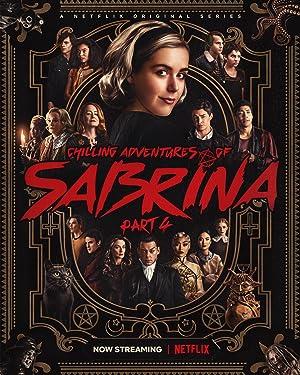 Chilling Adventures of Sabrina is an American supernatural horror web television series developed by Roberto Aguirre-Sacasa for Netflix, based on the Archie comic book series of the same name. The series is produced by Warner Bros. Television, in association with Berlanti Productions and Archie Comics. Aguirre-Sacasa and Greg Berlanti serve as executive producers, alongside Sarah Schechter, Jon Goldwater, and Lee Toland Krieger. The series is centered on the Archie Comics character Sabrina Spellman, portrayed by Kiernan Shipka, and also stars Ross Lynch, Lucy Davis, Chance Perdomo, Michelle Gomez, Jaz Sinclair, Tati Gabrielle, Adeline Rudolph, Richard Coyle, and Miranda Otto. Originally in development during September 2017 at The CW, the series was intended to be a companion series to Riverdale; however, in December 2017, the project was moved to Netflix with a straight-to-series order, consisting of two seasons. Filming takes place in Vancouver, British Columbia, where both seasons are shot back-to-back. The first ten episodes were released on October 26, 2018. The series has received very positive reviews, with critics praising Shipka's performance, as well as the premise, visuals, and directing. A Christmas special episode was released on December 14, 2018, and the second part of the first season is set to be released on April 5, 2019. In December 2018, Netflix renewed the series for a second season of 16 episodes, which will also be split into two parts.