A family comedy narrated by Katie, a strong-willed mother, raising her flawed family in a wealthy town filled with perfect wives and their perfect offspring. 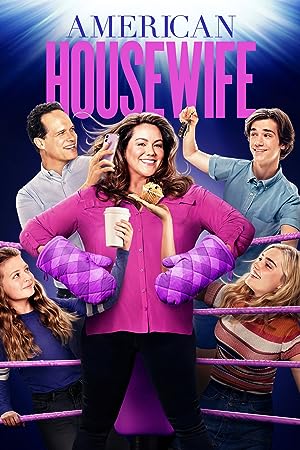 American Housewife is an American sitcom television series that debuted on October 11, 2016 on ABC. Created and written by Sarah Dunn and co-executive produced with Aaron Kaplan, Kenny Schwartz, Rick Wiener, and Ruben Fleischer, the Kapital Entertainment–ABC Studios co-production was greenlighted to series order on May 12, 2016. A preview was released on May 17, 2016. On November 4, 2016, ABC gave a full-season order of 22 episodes with an additional episode ordered on December 13, 2016 for a 23-episode first season.On May 11, 2017, ABC renewed American Housewife for a second season, which premiered on September 27, 2017. On October 31, ABC ordered two additional episodes, bringing the season total to 24. On May 11, 2018, ABC renewed American Housewife for a third season of 22 episodes, which premiered on September 26, 2018.