Iconoclastic Adam Conover from CollegeHumor turns life as we know it on its ear by showing us how unnecessary, and sometimes horrible, things we think we know to be real and true really are. 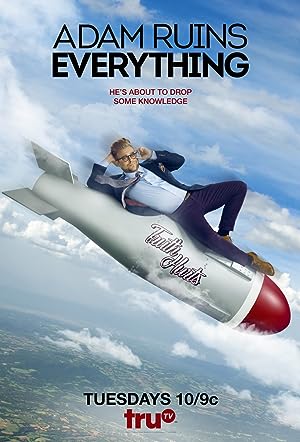 Adam Ruins Everything is an American comedy television series starring Adam Conover that debuted on September 29, 2015, with a 12-episode season on truTV. On January 7, 2016, it was announced that the show had been picked up for 14 additional episodes of season 1 to air starting on August 23, 2016. The series aims to debunk misconceptions that pervade U.S. society. On December 7, 2016, truTV announced the renewal of Adam Ruins Everything for a 16-episode second season, which premiered on July 11, 2017. An additional miniseries of six animated episodes premiered on March 20, 2018. On May 9, 2018, TruTV announced the show had been renewed for a third season, set to premiere in the fall of 2018. Upon beginning to air the additional episodes, it was revealed that they were an addition to the second season rather than a third season.