Condor is an American thriller television series based on the novel Six Days of the Condor by James Grady and its 1975 film adaptation Three Days of the Condor written by Lorenzo Semple Jr. and David Rayfiel. The series was created by Todd Katzburg, Jason Smilovic, and Ken Robinson and premiered on June 6, 2018 on Audience. In July 2018, it was announced that the series had been renewed for a second season. 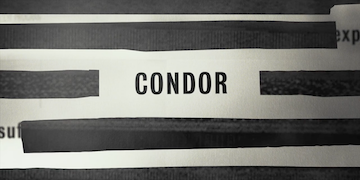