Case Closed, also known as Detective Conan (名探偵コナン, Meitantei Konan), is an ongoing Japanese detective manga series written and illustrated by Gosho Aoyama. It was serialized in Shogakukan's Weekly Shōnen Sunday on January 19, 1994, and has been collected into 95 tankōbon volumes as of October 18, 2018. Due to legal considerations with the name Detective Conan, the English language releases from Funimation and Viz were renamed to Case Closed. The story follows an amateur detective who was transformed into a child while investigating a mysterious organization, and solves a multitude of cases while impersonating his friend's father and other characters. The series received an anime adaptation by Yomiuri Telecasting Corporation and TMS Entertainment. The anime resulted in animated feature films, original video animations, video games, audio disc releases and live action episodes. Funimation licensed the anime series for North American broadcast in 2003 under the name Case Closed with the characters given Americanized names. The anime premiered on Adult Swim but was discontinued due to low ratings. In March 2013, Funimation began streaming their licensed episodes of Case Closed; Crunchyroll simulcast them in 2014. Funimation also localized the first six Case Closed films, while Discotek Media localized the Lupin III crossover special and its film sequel. Meanwhile, the manga was localized by Viz Media, which used Funimation's changed title and character names. Shogakukan Asia made its own English language localized version of the manga which used the original title and Japanese names. The tankōbon volumes of the manga have sold over 200 million copies worldwide, making it the fourth-best-selling manga series. In 2001, the manga was awarded the 46th Shogakukan Manga Award in the shōnen category. The anime adaptation has been well received and ranked in the top twenty in Animage's polls between 1996 and 2001. In the Japanese anime television ranking, Case Closed episodes ranked in the top six on a weekly basis. Both the manga and the anime have had positive response from critics for their plot and cases. The manga has been sold in 25 countries, while the anime has been broadcast in 40 countries. 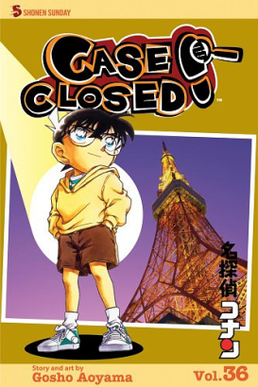